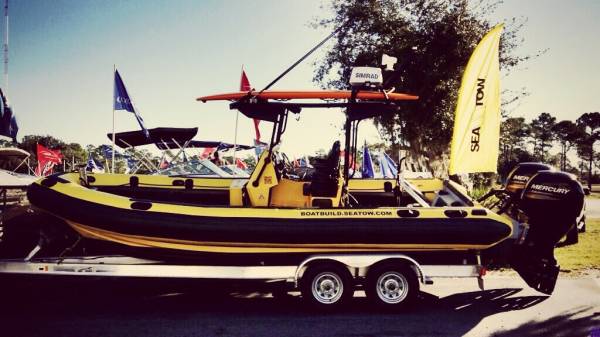 WM: How long have you been a boat captain? What initially got you interested in boating?

RP: I have been a commercial captain going on 15 years. I grew up in Brazil and started boating as a kid on our 23’ sailboat. I spent weekends sailing the coast and sleeping aboard the boat.

WM: What inspired you to open up your own Sea Tow franchise?

RP: I was fueling up a boat one day at a fuel dock in South Carolina and saw a Sea Tow boat tied up. I thought to myself, “I bet that would be a fun job…”

WM: What’s your favorite part of owning the franchise?

RP: Vessel recovery! I love the challenge of figuring out how to re-float or repair a boat so we can get it safely back into port.

WM: What made you interested in refurbishing a boat and why did you select a Willard Marine boat?

RP: I wanted the best boat out there for my business and for the safety of me and my captains. I have triplet daughters, a son, and a loving wife, and I don’t ever want to leave them without a father or husband so I decided to use purpose-built boats that I trust to get the job done. I have always loved building and fixing things, and as a new business owner I didn’t have the budget to buy new to the standard I wanted and needed. Instead, I decided to buy U.S. surplus boats. I wanted boats with no wood! I wanted boats that would last so I researched the construction of RIBs in my price range and Willard Marine had the best build strength I could find.

WM: In your opinion, what differentiates Willard Marine RIBs from others?

RP: I think that without a doubt, the Willard boats stand out for their build quality, sea keeping ability and ride. They just handle the seas like no other boat.

WM: What are the main updates/changes you made to your 730 RIB?

RP: I don’t even know where to start. You would really have to look at our build site for that answer but I can tell you the biggest ones are the hull extensions which add 32” to the hull. This isn’t just a bracket, it really makes the boat perform at the top of its game. We also cut out all the floors and built our own decks, which are removable and house our 150 gallon fuel tank. We also cut out the forward bomar hatch and built up the deck to give us a large hold for below deck storage.

WM: Can you talk to us about the boat tour you’re doing right now?

RP: We are touring boat shows and sharing the build details and components with the general public. We’re also visiting some commercial industry events to share the project. We made three presentations at the C-Port show this year detailing the rebirth of a RIB covering the design and additions off all the components we used. We are calling it the Ultimate Rescue Boat—it’s built and rigged like no other in its class!

WM: What is Sea Tow doing to celebrate their 30th Anniversary?

RP: Sea Tow has been celebrating their 30 year anniversary in many ways. The Founder, Captain Joseph Frohnhoefer, and his wife have made several appearances from north to south, and have also made appearances at all top boat shows and industry events. Learn more about the 30th Anniversary here: http://www.seatow.com/30Years.

WM: Finally, do you have a great Sea Tow rescue story you’d like to share with us?

RP: There are so many things that happen on the water that you would never expect; things that you truly can’t make up but sound like they’re fake. The stories that stand out are a bit awkward but I can say that I get a huge sense of gratitude in helping stranded mariners and families get back to the shore safely.

About Willard Marine
Headquartered in Anaheim, Calif., Willard Marine was founded in 1957, and is recognized as a leader in the design and construction of high-quality fiberglass/composite and aluminum boats for military, homeland security, commercial, law enforcement, SOLAS and other market segments. The company is privately held.  Contact Willard Marine today for your boat-building, repair and refurbishing needs at info@willardmarine.com or 714-666-2150.