Posted by Willard Marine on Tuesday, 04 November 2014 in Press Releases 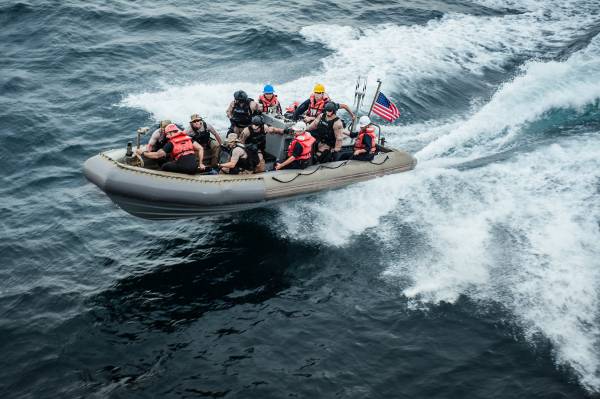 The contract includes a standard craft based on the 7-meter RIB WMI has been producing for the Navy for 25 years, and a separate version specifically for LPD-17 class ships, which WMI has also been supplying for a number of years. Twenty-four vessels have already been ordered under the contract and the first scheduled delivery begins in March 2015.

The terrorist attacks on the USS COLE in October of 2000 and multiple homeland target attacks in 2001 sparked secondary missions for these craft as identified in the contract as anti-terrorism/force protection; maritime interdiction operations; visit, board, search and seizure; safety boat/escort; and tow and recovery.

A critical operational requirement for these shipboard RIBs is that each boat must be carried aboard and deployed from a variety of U.S. Navy ship classes. Thus, the boats will be compatible with a variety of existing shipboard handling and stowage systems, including traditional davits and stowage chocks and other class-specific launch, recovery, and handling systems.

“This contract validates Willard Marine’s position as a long-time supplier of strong and reliable RIBs to meet the Navy’s most challenging operational environments and sea states,” said Ulrich Gottschling, president and chief executive officer of WMI. “Winning this five-year contract is testament to WMI’s exceptional boat design and production capabilities combined with our long, collaborative relationship with the Navy. We consistently deliver what the Navy needs, on time and on budget.”

The contract specifies a 254-hp inboard Steyr diesel engine with a Bravo Two X MerCruiser sterndrive. All vessels will be delivered with a Briartek man overboard indicator system display and antenna, as well as a forward M60/M240 machine gun foundation.

With more than five decades of design, engineering and manufacturing experience, WMI has developed more than 20 types of world-class watercraft for the U.S. Navy, Coast Guard, Army and Department of Homeland Security, as well as NOAA, foreign governments, and federal and local law enforcement agencies. Top achievements include RIB supplier to the U.S. Navy for more than 25 years; ISO 9001:2008 Certification; and production of a wide range of U.S. Coast Guard-approved and certified SOLAS rescue boats. The company is privately held.