Get Up Close and Personal With the America's Cup Umpire Boat

Posted by Willard Marine on Friday, 30 August 2013 in Events 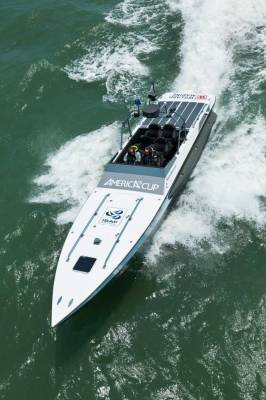 The 2013 America's Cup Challenge takes place September 7-21 in San Francisco, California as four teams sailing AC72 wing-sail catamarans vie for the prestigious America's Cup trophy. This year’s catamaran design means racing will take place at very high speed. In turn, they require an Umpire Boat to not only match these speeds, but exceed them, providing a safety measure (should a boat require immediate attention) and accurate visuals of the competition.

We are thrilled to announce that Willard’s High Speed Interceptor RIB was selected to serve as the Umpire Boat for this year’s races, and it’s a tremendous honor we’re proud to share with all of you. Get familiar with the Umpire Boat below.

Why was Willard Marine's 43' Interceptor RIB originally designed?
The Interceptor was initially prototyped in 2005 in response to a request made by the U.S. Navy.

What purpose did the 43’ Interceptor RIB serve for the U.S. Navy?
The U.S. Navy wanted a high-speed combat mission boat designed with a low radar signature that could perform rapid insertion and extraction of our Navy's men.

What is unique about the Interceptor’s design?
Willard worked closely with Team Scarab to refine their Deep V stepped hull design in order to meet the U.S. Navy’s requirements, including shock mitigation seats and light weight Cummins 600 hp twin diesel engines. The Interceptor also has a proprietary Supplemental Stability System that increases the stability, passenger comfort, and safety of high speed, heavily loaded craft, without the weight and drag (both aero and hydro) common in RIBs.

How fast can the 43’ Interceptor Boat go?
The 43' Interceptor can reach speeds of up to 62k.

Can I test drive the boat?
Because of the Interceptor’s high speed capabilities and hull design, it requires a very experienced boat driver to safely drive it.

Learn more about the America's Cup races and stay up-to-date on all the race results at americascup.com.
Last modified on Friday, 30 August 2013
Tagged in: Events
Call Willard Marine Request A Quote